I couldn’t tell you how many times I’ve tried to get decent footage of live performances and not ended up with a single usable second. So many one-off pieces have been lost in the sands of time and to say it’s been frustrating is an understatement.

Luckily, that wasn’t the case with ReInState : A Mirror Ritual, conceptualised for Trans-States: The Art of Crossing Over. Cavan McLaughlin, the conference’s organiser, had a brilliant team of student videographers all over the event and the quality of their footage was faultless. Another stroke of luck on my part was that Cavan, a gifted video editor with tastes similar to my own, agreed to edit the footage into this little visual taster, making this our debut collaboration and hopefully the first of many.

For any of you who’ve read my short story Prism – it won’t be difficult to see the themes I was working with personally and magically at the time, the excerpt at the beginning of the film is taken directly from Prism. This performance and the short story were developed in tandem as two complimentary, but fractured, parts of a riddle I was trying to solve.

It begins with the birth / resurrection of a cocooned, almost mummified figure, laid at the base of the mirror inside a magic circle. The ‘new born’ awakes, faceless, androgynous and unsteady on its feet and slowly learns to crawl, stand, walk and then dance, feeling its way into its body through instinct, memory and rhythm.

As the being develops it becomes aware of its own reflection in an inversion of Lacan’s Mirror Stage in the psychological development of children. The being never identifies with the Other and begins to crave its attention and love, becoming increasingly frustrated when it finds no human warmth. Soon, the dancer seeks to seduce the Other, beautifying and ‘humanising’ itself and gender to win the reflection’s affection.

It draws on exaggerated facial features, cuts off the gauze fabric that has been a veil between it and manifest reality, and eventually reveals a human face underneath. When the being realises it will never receive the love it craves it becomes frenzied, desperate and manic, and destroys the object of it’s attention by smashing the mirror with a hammer.

The threshold is obliterated.

From the carnage of the broken shards, with a new calmness and sense of self-control, the being creates a third face; a divine visitor or angelic messenger, then steps out of the magic circle and moves into the world. The whole piece lasted just over an hr and had a killer soundtrack featuring bands and musicians that have formed the soundtrack to my life for many years (see below).

I was also invited to perform this again at Instigate Art’s evening of live performance art at Manchester Art Gallery in March the following year, in front of William Etty’s imposing and recently restored masterpiece The Sirens and Ulysses.

I hope you enjoy the video.

As the Sea Melts the Sun – Tribes of Medusa

Victim to the Charms of Radio – Pentaphobe

Are the Songs My Disease? – Queen Adreena

For Everything a Reason – Carina Round

A week ago I performed at the Trans-States conference, an interdisciplinary event examining ‘The Art of Crossing Over’. Despite it being the conference’s first year it attracted a huge number of internationally based scholars, artists and magical practitioners eager to communicate and cross-pollinate.

Highlights for me included Patricia McCormack’s keynote talk discussing ‘mucosal beginnings’  and monstrous desire in Lovecraft and popular culture and Alan Moore’s call to go forth and infuse magic back into our cultural imagination through art.

I discussed’Written in Skin : Flesh as A Language Frontier,’ framing mine and Loren’s performance project against Helen Cixous’s essay ‘The Laugh of the Medusa’ and was scheduled to perform ‘reinState’ with Laura McGee. After finding out last minute that Laura couldn’t make it, with only a couple of weeks to reformulate something dealing with trans-states, identity and ‘crossing over’, I had to work fast to conceptualise something new.

The original reinState performance, still to be performed on the 8th Oct at HOME Mcr, hinged on the idea of two people meeting, fusing and then ‘reinstating’ themselves through dance. Performing this alone would have been impossible and so I conceived a way of doubling myself, still keeping the ‘restoration of an identity’ idea key. 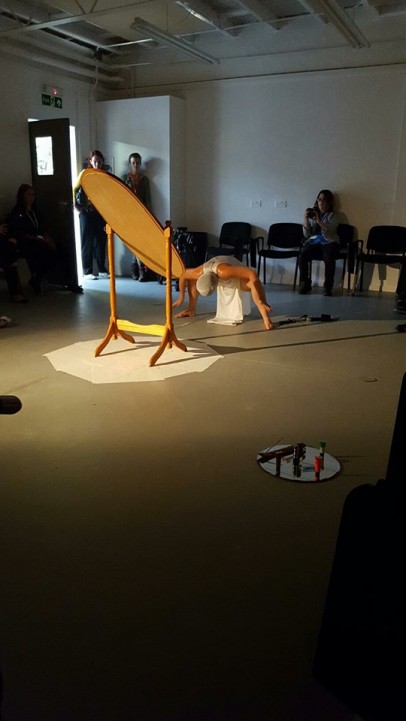 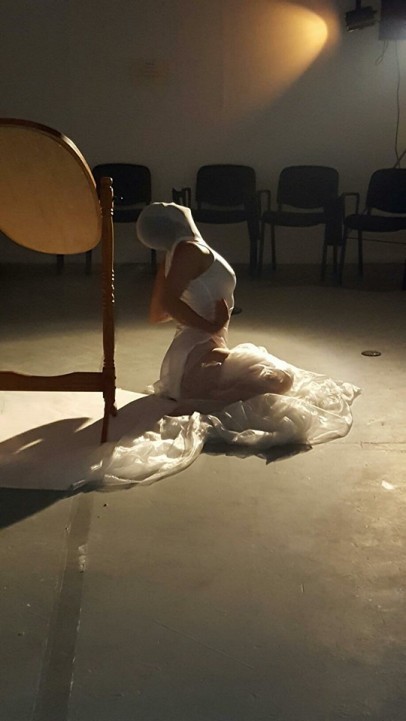 On holiday in magical Wales I had an image of myself surrounded by a circle of mirrors, with a large full length in the centre. The mirrors were clearly markers of the four directions and the mirror in the centre represented myself. I kept coming back to the world ‘reinState’, defined as restoring something to it’s former power, and it became clear that before something could be reinstated it first needs to be changed or broken down in some way. The verb itself indicates a shift of power, something that has been removed or disrupted, being given back.

I started to play with the idea of a person who has never seen their reflection in a mirror before, like a child or an animal or someone stepping back into consciousness after a long period of mental disorientation. I liked the idea of enacting the mirror stage, treating your reflection as something alien and then explored what it would be like to fall in love with this reflection and even to be rejected by it.

I put together a playlist of music that would be the guiding force to this mirror ritual and threw in all kinds of tracks from Public Image Ltd’s ‘Death Disco’ and ‘Fodderstompf’ to Tom Waits ‘Hell Broke Luce’. Through this musical collage a story started to emerge; of awakening, of ‘coming back into’ my body, dancing, encountering the other, trying to befriend it, falling in love, becoming more and more frustrated as it remained cold and aloof and eventually destroying it.

The answer then became clear. I could reinstate my identity by reshaping the broken fragments in anyway I liked. I rebuilt a third entity, unlike myself or my reflection, a third person, an abstract deity and a consciousness beyond myself.